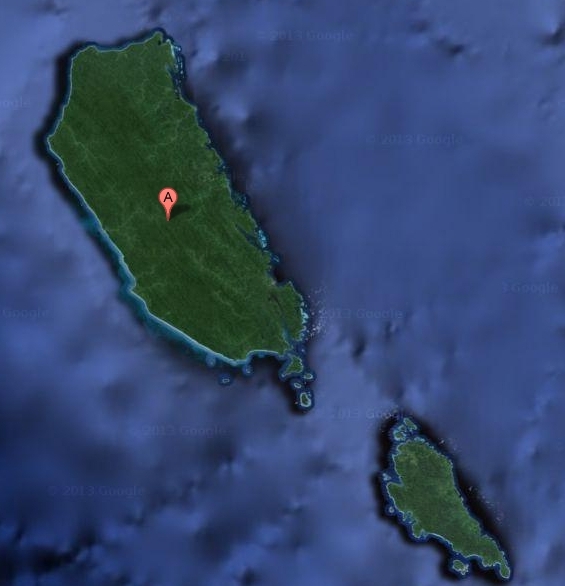 Though not a great distance from the mainland, the Mentawai Islands and its people were kept isolated until the 19th century by strong winds, unpredictable currents and razor-sharp corals.
It’s thought that the archipelago separated from Sumatra some 500,000 years ago, resulting in such unique flora and fauna that sees Mentawai ranked alongside Madagascar in terms of endemic primate population. Of particular interest is Siamang kerdil, a rare species of black and yellow monkey, named simpai Mentawai by the locals.
The largest island, Siberut, is home to the majority of the Mentawai population and is the most studied and protected island in the archipelago. About 60% of Siberut is still covered with tropical rainforest, which shelters a rich biological community that has earned it a designation as a Unesco biosphere reserve. The western half of the island is protected as the Siberut National Park (TNS).
Pulau Sipora is home to Tua Pejat, the seat of regional government and a surfer drop-off point. The archipelago’s airport is located at Rokot. With only 10% original rainforest remaining, it’s also the most developed of the Mentawai islands.
Further south are the Pulau Pagai islands – Utara (North) and Selatan (South), which rarely see independent travellers.
Change has come quickly to Mentawai. Tourism, logging, transmigrasi (a government sponsored scheme enabling settlers to move from overcrowded regions to sparsely populated ones) and other government-backed attempts to mainstream the culture have separated the people from the jungle and whittled the jungle into profit. It isn’t what it used to be, but it is a long way from being like everywhere else. And that keeps trekkers happily braving mud and bugs to visit the remaining traditional communities.
(information source: Lonely Planet Travel Guide)

The river scene from Apocalypse Now flashes into your mind as you head upstream in a longboat and watch the people and villages growing wilder by the minute. Soon you’re out of the canoe and following some shaman-eyed tribesman with crazy tattoos and a loincloth through the mud for the next few hours, passing waterfalls, balancing on slippery tree branches and swimming across rivers, to his humble abode on poles in the middle of nowhere.
There’s been fervent discussion about the authenticity of these trips, and what actually constitutes a traditional lifestyle. The mud is real, and so are the tattoos – decide for yourself.
In the past, mainland tour agencies had a stranglehold on the tourist dollar, but times have changed. It is infinitely more flexible, rewarding and sustainable to turn in Siberut up at Muara Siberut independently and tailor a trek to remote communities.
My friend Rillu is an independent tourist guide and will bring you to the most incredible places of the island. One of his uncle still lives in a big “uma” about 1.5 hours walk away from the river. It is not cheaper than agencies tours but he can suit the tour to your wishes and he has easy contact to the jungle Mentawai because he is one of them.
(information sources: Lonely Planet Travel Guide and my own experience)

The first time I visited Siberut it had no electricity. The electric plant was under construction. You had only a few motorbikes. Now electricity has arrived and traffic too. Motorbikes, cars and even small truck can be seen on the road everywhere. Even in the middle of the jungle you can meet young people with their mobile. A road network is under construction and will bring even more traffic in the future.

To travel into the jungle you have to ride a small canoe called “pom-pom” with its very particular engine. Once the boat ride finished the only travel mode from place to place is by walking. You’ll have to follow muddy trail, cross stream walking on very slippery tree or is the river is bigger you may have to swim across. It is tiring hikes in a very humid atmosphere and tropic rain will be for sure your guest. It is best to travel light, don’t worry too much you will get dirty, that is the only warranty you have.

Most of the Mentawai live in villages only a few still live permanently in the jungle. Here too the young men don’t wear the traditional loin-cloth any more. They wear western clothing. Women were topless but now when they meet tourists the women wear t-shirt. This was not the case when I was there first time in 1997. Only older people still wear the traditional clothing. For tourists show the young jungle Mentawai wear traditional clothe.
The Mentawai are covered with traditional tattoo. The more they have bigger is their knowledge in traditional medicine. Most shaman have incredible tattoo. It is a painful process to be tattooed. They use fire ashes for the colour pigment and a spine and hammer to bring it under the skin.
“Sagou” made out of the palm tree serve as food for the pigs, chickens and humans. For human it is processed into flour and then cooked on the fire.
Even if they are officially Christian the jungle Mentawai are animist. They keep the head scull of all animal the kill for eating. This applies to domestic or wild life. You’ll see in the front of the house a lot of pig, monkey and deer skulls.
I have been invited in some ceremony after successful hunts or other ritual ceremonies and you see the shaman inspect the heart of the killed animal.