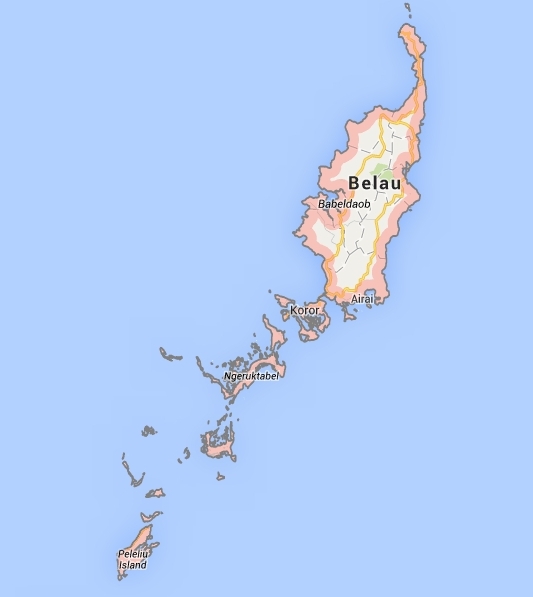 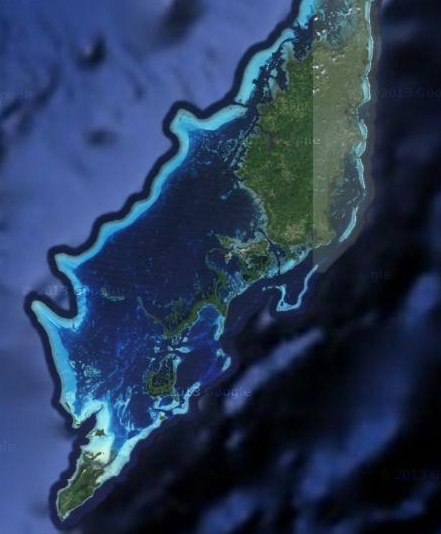 Palau, sometimes spelled Belau or Pelew, officially the Republic of Palau The name for the islands in the Palauan language, Belau, likely derives from either the Palauan word for "village", beluu, or from aibebelau "indirect replies", relating to a creation myth. The name "Palau" entered the English language is an island country located in the western Pacific Ocean. It is geographically part of the larger island group of Micronesia. The country's population of around 21’000 is spread across 250 islands forming the western chain of the Caroline Islands. The most populous island is Koror. The islands share maritime boundaries with Indonesia, the Philippines, and the Federated States of Micronesia. The capital Ngerulmud is located in Melekeok State on the nearby island of Babeldaob.

Palau has a tropical climate with an annual mean temperature of 28 C. Rainfall is heavy throughout the year, averaging 3800 mm. The average humidity is 82% and although rain falls more frequently between July and October, there is still much sunshine. Typhoons are rare, as Palau is outside the main typhoon zone.

While much of Palau remains free of environmental degradation, areas of concern include illegal dynamite fishing, inadequate solid waste disposal facilities in Koror and extensive sand and coral dredging in the Palau lagoon. As with other Pacific island nations, rising sea level presents a major environmental threat. Inundation of low-lying areas threatens coastal vegetation, agriculture and already-insufficient water supply. Wastewater treatment is a problem, along with the handling of toxic waste from fertilizers and biocides.
Saltwater crocodiles are also residents of Palau and occur in varying numbers throughout the various mangroves and even in parts of the beautiful rock islands. Although this species is generally considered extremely dangerous, there has only been one fatal human attack in Palau within modern history, and that was in the 1960s. In Palau the largest crocodile measured in at 4.5 metres.
The nation is also vulnerable to earthquakes, volcanic activity, and tropical storms. Palau already has a problem with inadequate water supply and limited agricultural areas to support its population.

The country was originally settled around 3'000 years ago by migrants from the Philippines and sustained a Negrito population until around 900 years ago. The islands were first visited by Europeans in the 18th century, and were made part of the Spanish East Indies in 1885. Following Spain's defeat in the Spanish–American War in 1898, the islands were sold to Imperial Germany in 1899 under the terms of the German–Spanish Treaty, where they were administered as part of German New Guinea. The Imperial Japanese Navy conquered Palau during World War I, and the islands were later made a part of the Japanese-ruled South Pacific Mandate by the League of Nations. During World War II, skirmishes, including the major Battle of Peleliu (between 15 September and 25 November 1944 when more than 2’000 Americans and 10’000 Japanese were killed), were fought between American and Japanese troops as part of the Mariana and Palau Islands campaign. The islands passed formally to the United States under United Nations auspices in 1947 as part of the Trust Territory of the Pacific Islands.
Having voted against joining the Federated States of Micronesia in 1979, the islands gained full sovereignty in 1994 under a Compact of Free Association with the United States.
The Compact of Free Association between the United States and Palau sets forth the free and voluntary association of their governments. It primarily focuses on the issues of government, economic, security and defence relations. Palau has no independent military, relying on the United States for its defence. Under the compact, the American military was granted access to the islands for 50 years. The US Navy role is minimal, limited to a handful of Navy Seabees (construction engineers.) The United States Coast Guard patrols in national waters.
In 1981, Palau voted for the world's first nuclear-free constitution. This constitution banned the use, storage and disposal of nuclear, toxic chemical, gas and biological weapons without first being approved by a 75% majority in a referendum. This ban delayed Palau's transition to independence, because the U.S. insisted on the option to operate nuclear propelled vessels and store nuclear weapons within the territory.

Palau is world renown for marine bio-diversity and an abundance of large pelagic animals that includes schools of sharks, barracudas and lots of manta rays. Our warm clear tropical waters are legendary amongst divers for dramatic coral encrusted walls rising from the depths to within inches of the surface. Home to over 1'300 species of fish and more than 700 species of coral, Palau also offers exciting WWII shipwrecks and plane wrecks.
Jellyfish Lake is a place most can only dream of, this daring and unusual phenomena, departs radically from convention; for it is an enclosed body of water wherein – over the course of a millennia – resident jellyfish have completely lost their sting because they have not had to fight off predators. Instead, they spend their days in privileged leisure, pulsating gently from one side of the lake to the other while catching the sun's rays and farming their own food supply of algae.

To get there you will go mostly through Manila (Philippines) or Guam with United Airlines, formerly Continental Micronesia. Other options are from Cairns (Australia), Taiwan, Korea or Japan with different airlines.

Diving is the main tourism industry in the country. You’ll find many diving centres. It is difficult to make a choice. They are well organised and serious. Therefore I can’t recommend one in particular. I did dive with Sam’s Tours Palau and was very happy with them. As a guest you are really welcome.