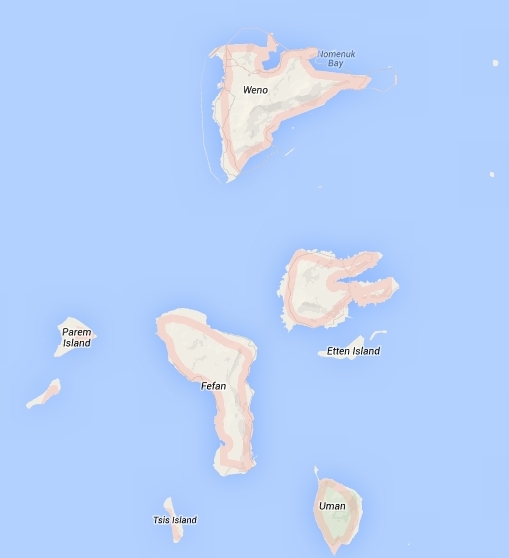 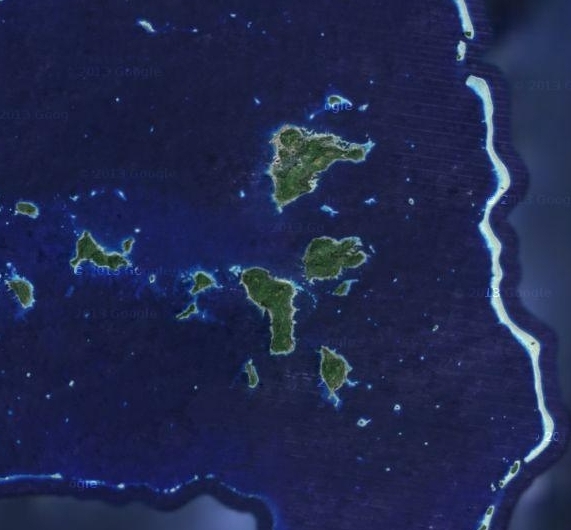 Chuuk Lagoon, formerly known as Truk Lagoon, is a sheltered body of water in the central Pacific. About 1800 km north-east of New Guinea, it is located mid-ocean at 7° N latitude, and is part of Chuuk State within the Federated States of Micronesia. The atoll consists of a protective reef, 225 km around, enclosing a natural harbour 79 by 50 km, with an area of 2130 km2. It has a land area of 127.4 km2, with a population of 47871 people.
Chuuk means mountain in the Chuukese language. The lagoon was known mainly as Truk (a mispronunciation of Ruk), until 1990.
Chuuk Lagoon is part of the larger Caroline Islands group.
The area consists of eleven major islands (corresponding to the eleven municipalities of Truk lagoon, which are Tol, Udot, Fala-Beguets, Romanum, and Eot of Faichuk group, and Moen, Fefan, Dublon, Uman, Param, and Tsis of Namoneas group) and forty-six smaller ones within the lagoon, plus forty-one on the fringing coral reef, and is known today as the Chuuk islands, part of the Federated States of Micronesia in the Pacific Ocean.

It is not known when the islands of Chuuk were first settled and where the original inhabitants came from. Based on archaeological evidence, these islands had originally been settled more than 2000 years ago and had no continuous settlement until about 1300 AD. It is probable that people came from Pohnpei and Kosrae to the east.
First recorded sighting by Europeans by Spanish navigator Álvaro de Saavedra on board of ship Florida in between August and September of 1528. They were later visited by Spaniard Alonso de Arellano on 15 January 1565 on board of galleon patache San Lucas.
As part of the colonial territory of the Caroline Islands, Truk was part of the Spanish Empire. The Caroline Islands control were sold to the German Empire in 1899. It became a possession of the Japanese Empire under a mandate from the League of Nations following Germany's defeat in World War I.
During World War II, Truk Lagoon was the Empire of Japan's main base in the South Pacific theatre. Truk was a heavily fortified base for Japanese operations against Allied forces in New Guinea and the Solomon Islands, serving as the forward anchorage for the Japanese Imperial Fleet.
The place was considered the most formidable of all Japanese strongholds in the Pacific. On the various islands, the Japanese Civil Engineering Department and Naval Construction Department had built roads, trenches, bunkers and caves. Five airstrips, seaplane bases, a torpedo boat station, submarine repair shops, a communications center and a radar station were constructed during the war. Protecting these various facilities were coastal defense guns and mortar emplacements.
The Japanese garrison consisted of 45’000 men. Due to its heavy fortifications, both natural and manmade, the base at Truk was known to Allied forces as "the Gibraltar of the Pacific".
A significant portion of the Japanese fleet was based there, with its administrative center on Tonoas (south of Weno). At anchor in the lagoon were the Imperial Japanese Navy's battleships, aircraft carriers, cruisers, destroyers, tankers, cargo ships, tugboats, gunboats, minesweepers, landing craft, and submarines. Some have described Truk as Japan's equivalent of the Americans' Pearl Harbor.
Once the American forces captured the Marshall Islands, they used it as a base from which they launched an early morning attack on 17th February 1944 against Truk Lagoon. Operation Hailstone lasted for three days, as American carrier-based planes sank twelve warships and thirty-two merchant ships, while destroying 275 aircraft. The consequences of the attack made "Truk lagoon the biggest graveyard of ships in the world".

Most of the roads and transportation systems are poor or in disrepair; an extensive infrastructural redevelopment plan has begun. It consists of a five-phase project to completely reconstruct the existing sewer, water and storm drainage systems as well as pour concrete roadways in the majority of the villages of Weno.
Tourism, especially scuba diving among the many wrecks of Truk Lagoon, is the island's main industry. Copra, dried coconut meat, is the only cash crop and output is relatively insignificant.
(information source: Wikipedia)

In 1969, French oceanographer Jacques Cousteau and his team explored Truk Lagoon. Following Cousteau's 1971 television documentary about the lagoon and its ghostly remains, the place became a scuba diving paradise, drawing wreck diving enthusiasts from around the world to see its numerous, virtually intact sunken ships. The shipwrecks and remains are sometimes referred to as the "Ghost Fleet of Truk Lagoon". Scattered mainly around the Dublon, Eten, Fefan and Uman islands within the Truk group, a number of the shipwrecks lie in crystal clear waters less than 15 m below the surface. In waters devoid of normal ocean currents, divers can easily swim across decks littered with gas masks and depth charges and below deck can be found numerous human remains. In the massive ships' holds are row upon row of fighter aircraft, tanks, bulldozers, railroad cars, motorcycles, torpedoes, mines, bombs, boxes of munitions, radios, plus thousands of other weapons, spare parts, and other artifacts. Of special interest is the wreck of the submarine I-169Shinohara which was lost when diving to avoid the bombing. The submarine had participated in the attack on Pearl Harbor back in 1941.
(information source: Wikipedia)

Flying to Chuuk you’ll start in Guam or Hawaii depending from your travel origin. The airplane is stopping on Chuuk on its way between Guam and Honolulu. Mainly you have one flight a day going toward Hawaii one day and going to Guam next day. Guam is 1½h flight from Chuuk. Chuuk International Airport is on the administrative island of Weno. It is served by United Airlines, formerly Continental Micronesia. It is very expensive to get there as it has no airline competition.
The drive from the airport to the Blue Lagoon resort and dive shop takes upwards about 35 minutes to complete, although the distance is less than 8 km.

There is only one dive centre on land at the southern tip of Weno Island, the Blue Lagoon Resort. The resort is in a nice location between palm trees and Japanese war ruins and beside the only sandy beach on Weno.
The other options are live-aboard diving cruise.